TQ PUBG Mobile has qualified for the PMCO finals in Berlin

They couldn’t have had a better start in a face-to-face tournament representing Team Queso. This weekend, Marco, Ayala, Axeel and Mystic, led by Gabo, while Tate and Dekc were in the distance, achieved an incredible third position in the face-to-face qualifier for the PMCO in Berlin, and thanks to that they have secured a spot in the world finals, where they will face the best teams in the world next weekend, on the 26th, 27th and 28th of July.

The competition lasted two days, a total of 12 games, six on Saturday and six on Sunday and the top five finishers qualified for the finals. Team Queso began with a fantastic second position, and despite not achieving any victory in the five remaining games on Saturday, they managed to place in high positions and finish the day in eighth position, with only 8 points of difference between them and the fifth team a difference that could get erased in just one game.

On Sunday, with everything to be decided, our players gave their all and knew how to overcome all adversities, making fantastic rotations and with great strategies. Always demonstrating a knowledge of the game that few can hope to match. Out of the six games, they won one, they placed 4th three times, one in 6th place and once they finished in the 13th position. Always with a good number of eliminations, they managed to score 203 points at the end of the 12 games and placed in third position. 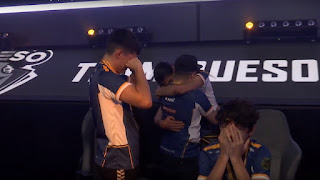 Once it was over, they were able to unleash the tension accumulated after two days of competition and they showed what it meant for them to have achieved a result like this, after such a hard journey, especially before joining Team Queso.

The lack of resources has never been in the way of these players to demonstrate their talent. They have remained at the top in LATAM in spite of having played most of the times with low-end devices and having to fight against unforeseen circumstances like blackouts during tournaments.

Thanks to their talent, their ambition and the human quality that they have demonstrated as a group, these players are where they deserve, having fun and making it possible for PUBG Mobile fans to enjoy some high-octane games.

Gabo: ‘We are very happy to have demonstrated that in LATAM we have what it takes to compete at the same level as the rest of the world. Not only that, but also having achieved this in our first face-to-face tournament taking into account the experience of other teams and how well we managed to play. We hope that many will support us, and we will give our all in that final’.

Next weekend they will be live from Berlin and you won’t want to miss the world’s best PUBG Mobile in the finals of the PMCO Spring Split. We’ll be waiting for you!

This website uses cookies to improve your experience while you navigate through the website. Out of these, the cookies that are categorized as necessary are stored on your browser as they are essential for the working of basic functionalities of the website. We also use third-party cookies that help us analyze and understand how you use this website. These cookies will be stored in your browser only with your consent. You also have the option to opt-out of these cookies. But opting out of some of these cookies may affect your browsing experience.
Necessary Always Enabled

Any cookies that may not be particularly necessary for the website to function and is used specifically to collect user personal data via analytics, ads, other embedded contents are termed as non-necessary cookies. It is mandatory to procure user consent prior to running these cookies on your website.