Team Queso is ready for the Clash of Clans World Championship

This weekend the Clash of Clans World Championship will be taking place in Hamburg, with a total prize of one million dollars and Team Queso is among the eight participants.

The tournament brings together the eight best teams in the world, which will face each other at the Bayclard Arena in Hamburg to become the best Clash of Clans team in the world. Team Queso will be there fighting on the 25th of October in the quarter-finals.

All participating teams have had to play and win countless games worldwide to qualify, sifting the best of the best every month and ensuring the highest quality in this unprecedented event for Supercell, the game’s developer.

Team Queso will be facing the Chinese team Shen Zhou during the quarter-finals. The other participating teams are Tribe Gaming, INTZ, Nova, QueeN Walkers, MCES and Vatang. On Friday we will be able to watch the quarter-finals unfold and these are all the pairings: 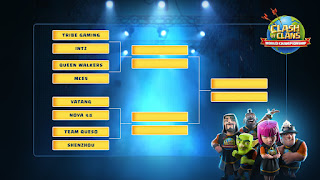 To participate in this event, Team Queso first had to place among the top four in an extremely challenging on-line phase (ESL April Qualifier) that had about 500 clans around the world. Thanks to this, the team was able to travel to Katowice (Poland) to compete in the World Championship qualifier. The other four teams that qualified did it so through Clan War Leagues, and that’s how the top 8 teams were chosen to compete in April in Katowice. Team Queso managed to be the best in Poland and secured a spot for the World Championship.

OskiVM, Almualin, MaicolDP, Fed and Rigotorres are the players that will represent the entire Spanish-speaking community in Hamburg, and Zolokotroko will also be with them, who will broadcast the event on his YouTube channel although you can also watch it on the official ESL channel.

On the 25th October at 09:30 CEST, you will be able enjoy the best Clash of Clans action in the world and support Team Queso on their way to victory. Pay close attention to Team Queso’s social media for more information about the tournament.

See you in the village!